Win-Win Textiles recommends the use of biosynthetics as an alternative to synthetic fibres based on fossil fuels; however, the field of biosynthetics is very complex with a few concerns that need further discussion.

Bio synthetics consist of polymers made from renewable resources, either wholly or partly, and can be a great alternative to fossil fuel-based materials when considering resource scarcity and climate change. However, deriving feedstocks from input-intensive agriculture can negatively impact ecosystems and human health. Thus, the feedstock has to be sourced and managed responsibly to realise this potential.

It is notable that the most commonly used feedstock used for biobased synthetics such as starch, corn, sugar cane, sugar beet or plant oils often compete with food crops. Therefore, the aim should be to use biomass/cellulose-based or waste-based (residues from agriculture or forestry) or non-food crops like algae, fungi and bacteria as soon as commercially available. Feedstocks from waste, while not yet as advanced for textiles, will most likely be more environmentally friendly and more efficient, as they generally do not require new production of crops, but reutilise waste that would otherwise end up discarded. Since the most commonly used feedstock at this stage is corn-starch, one needs to keep the discussions on genetically modified organisms (GMOs) in mind. The industry is divided with regards to the use/non-use of GMOs, and there are very strong arguments on both sides, which need to be addressed as a much larger topic moving forward.

It is also worth mentioning that biobased synthetics are not necessarily biodegradable or recyclable. Only few biosynthetics can biodegrade in industrial compost facilities under specific conditions like certain temperatures, pressure and humidity. Furthermore, most recycling technologies are unable to distinguish between the different biosynthetic and conventional synthetic types and can contaminate each other’s recycling infrastructure. This also means that biobased synthetics can be (though they are not necessarily) a solution for microplastics. Depending on whether a biobased material is able to biodegrade, it is also not a given that it can degrade under any given circumstance, e.g. in water. Furthermore, most commercially available biosynthetics at this stage are only partially derived from biomass, which means they are still made from non-renewable feedstock and also shed harmful microplastics into our waterways. Below figure shows global production capacities of bioplastics in 2018 by material type and indicates which materials are biodegradable. As you can see, Bio-PET, PE, PA and PTT are more than 50% of all biobased synthetics, but are not biodegradable and need to be recycled at the end of life as conventional synthetics. Only little above 40% of all biosynthetics are biodegradable. 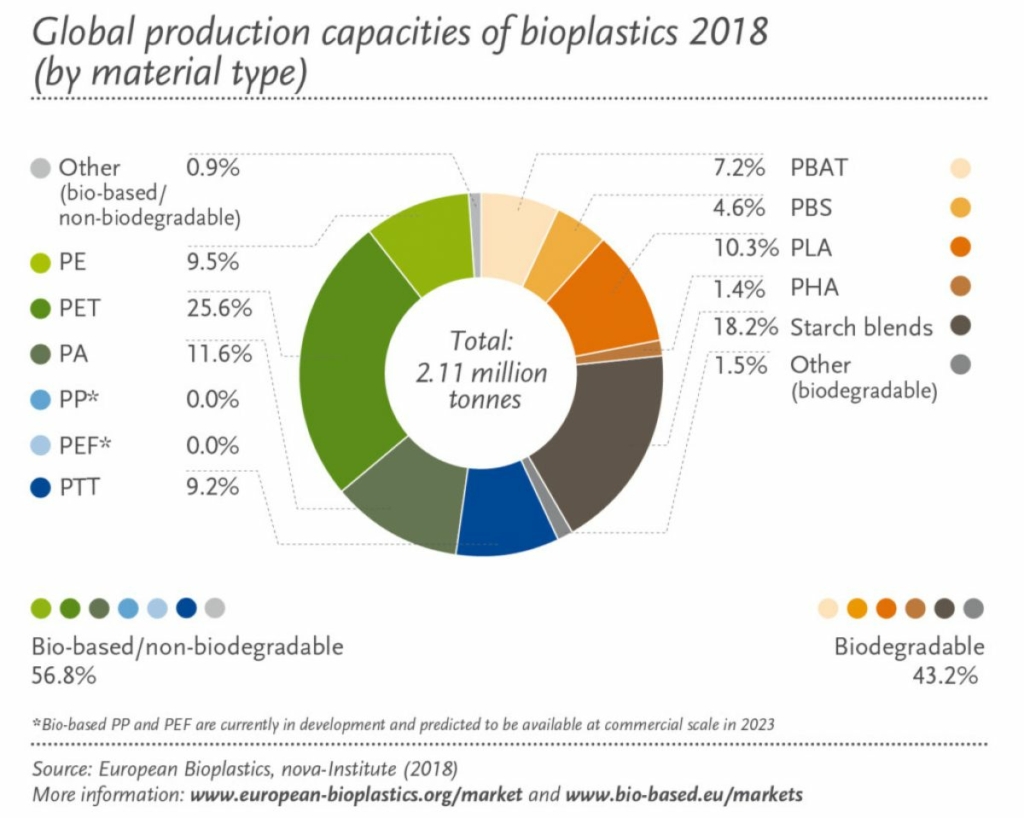 When using biosynthetics fibres, brands will contribute to the SDGs:

As mentioned, the feedstock used for the production of biosynthetics can be separated into three different stages: 1st generation: crops, 2nd generation: waste (bagasse, straw, wood, and biomass), 3rd generation: non-food resources (algue, bacteria, fungus). The major base for biobased polyester is usually corn starch, whereas biobased polyamide is usually made from castor oil. The complexity of biosynthetics is shown in below figure, which is from the market study: Bio-based Polymers in the World by the Nova Institute for Ecology & Innovation.

Firstly, we shall take a look at Polylactic Acid (PLA) as the most commonly used example.

The resulting sensory and visual fibre attributes are very similar to polyester.

Another example of the polyester family is partially biobased PTT (Poly Trimethylene Teraphtalate). The most commonly known example is Sorona® by DuPont™ with 37% plant-based resources by weight. It is made of two monomer units, pertroleum-based oil (terephtalic acid (PTA)) and a monomer made of a renewable resource such as corn or biomass (1,3 propanediol (PDO)).

DuPont™ uses a proprietary polycondensation polymerization process in the production of Sorona®.

Partially biobased PET is already commercially available today made of biobased ethylene glycol. The ethylene glycol monomer reacts with a terephtalic acid monomer to build the bio-PET polymer. There have been a few successes with biobased PET by now. Toray’s Ecodear®PET consists of 30% biobased synthetic polymer content. The first laboratory scale trials of Toray also proved that PET can be produced from 100% renewable biomass feedstock. Far Eastern New Century (FENC) and Virent also made this possible, transforming Virent’s BioFormPX® paraxylene to terephtalic acid, which then can be converted into biopolyester.

Due to its high ricinoleic acid content (almost 85%), castor oil that is gained from the seeds of the castor plant Ricinus Communis L is the most commonly used renewable feedstock in the production of biobased polyamides. This unique aliphatic acid is not found in the oil of other plants. Sebacic acid and undecenoic acid are the primary components of castor oil used to produce biobased polyamides. Growing research and development activities as well as innovative investments are expected to increase the application area of bio-polyamides, which are likely to become an important opportunity in the next few years. Biobased DA10 and DC10 are used in the production of PA6,10, PA10,10 and PA10,12. Fulgar’s EVO® PA10,10 is 100% biobased, as is Arkema’s PA11, branded as Rilsan®. According to the Bio-Polyamide Market Forecast 2016 – 2024 by the Transparency Market Research, bio-polyamide 6 is expected to be the largest product segment in the global market due to its high performance to cost ratio.

Rilsan® by Arkema is a PA11 made from castor oil, which is manufactured by polymerization of 11-aminoundecanoic acid.

PA10,10 is a long-chained AABB-type polyamide, which belongs to the nylon family of biobased polymers and is made from castor oil.

According to the TE, the Fulgar Labs developed a process to generate a final fibre suitable for the nylon textile filament market.

The market share of biobased synthetics is estimated to be less than 1% of to the total synthetic fibre production, but there is no industry wide data available. The demand for bioplastics in packaging, however, is expected to grow from 0.2% in 2013 to 2.4% by 2023, just to give an idea. Nevertheless, with an increasing demand for synthetic fibres and a growing interest for sustainability within the textile industry, the growth of biobased synthetic fibres is inevitable. There are currently only few companies producing biobased synthetics, hence integration should be straightforward, though availability is limited. E.g. NatureWorks LLC’s annual production capacity of Ingeo™ is 140,000 tons. The cost for biosynthetics depend largely on the oil prices. When oil prices are low, biobased materials are usually more expensive. One yard of PLA fabric costs between US$ 3 and US$ 8 even though the resin costs are more or less the same for PLA and polyester.

To date, all Life Cycle Assessment (LCA) work on biosynthetics has been based on the branded Ingeo™ PLA polymer from NatureWorks. Thus, further LCA work needs to be conducted to get a better understanding of the sustainability attributes of bio synthetics in general. The most energy used in the production of PLA is during the fermentation process, only 36% during the corn production, and is in total lower than the energy use of conventional polyester production. The same accounts for the global warming potential, which is only two thirds of conventional polyester. One needs to keep in mind that crops bind CO2 when growing. When looking at water usage, the total water consumption for PLA is also less than that of polyester and also used at different stages. During polyester production, 90% is used for cooling water. During PLA production, only 22% is used for cooling, 35% is used during the fermentation and 43% for irrigating the corn. According to the TE, the water demand for the biopolymer PLA Ingeo™ produced by NatureWorks, which has the greatest adoption and data in the market, is 49 kg water/kg fabric. The same polymer uses input chemicals such as sulfur dioxide, sulphuric acid, calcium hydroxide and enzymes. Additionally, chemicals are applied in the intensive corn agriculture in the form of pesticides and fertilisers, which result in the emission of oxides, nitrates and phosphates. These chemicals can lead to soil and water pollution. However, no solvent is being used during polymerization, and the by-product is water, which can be further used during processing. Again, looking at the example of Ingeo™ by NatureWorks, genetically modified corn is partly used; however, this is not necessary. To protect biodiversity and the local environment, NatureWorks declared that 100% of its agricultural feedstock used for Ingeo will be ISCC Plus certified by 2020. The land required for corn farming of PLA is only one third of the usual land used for natural plant-based fibres such as cotton. Furthermore, the feedstocks are renewable and reduce the dependency on petrochemicals and the depletion of non-renewable resources.

As more biobased products enter the market, further LCA work needs to be done to learn more on the sustainability impact of biosynthetics, especially when looking at 2nd and 3rd generation biosynthetics.

There is a great potential in biosynthetics leading to great investments and innovation of various feedstocks. Next to biomass and waste from agriculture, forestry and food waste, novel feedstocks like algae, fungi, enzymes and bacteria are explored. Furthermore, biobased manmade protein fibres like spider silk, recycled CO2 based fibres, exploring the approach to recycle carbon directly as a feedstock, neoprene-free wetsuits made from biobased materials, biobased alternative coatings and finishings for textiles and biobased alternatives to synthetic leather (polyurethane) are under development.

The following certifications can be applied for biosynthetics: